Be strong and justice will prevail eventually. You're not just a Palestinian hero now you're and arab symbol of what resistance really is. I keep you and your family in my prayers, and I pray you get back home to them safely.

As the Palestinian hunger striker Khader Adnan nears death, Sinn Féin spokesperson on Foreign Affairs, Pádraig Mac Lochlainn has called on the Tánaiste and Minister for Foreign Affairs, Eamon Gilmore and his European counterparts to urgently intervene to save his life and demand that the Israeli state meet their responsibilities under international law.

Mr Adnan is being held without charge by the Israeli state under their “administrative detention” system.

“United Nations Special Rapporteur on the situation of human rights in the Palestinian territories, Richard Falk has expressed his urgent and extreme concern regarding Khader Adnan, and urged the international community to intervene on his behalf so it is not good enough for the Tánaiste to simply express concern.

“I am calling on the Tánaiste and his European counterparts to urgently intervene to save Khader Adnan’s life.

“The practice of ‘administrative detentions’ is clearly unjust and has been used systematically as part of the military occupation of the Palestinian territories by the Israeli state.

“Over the years Israel has administratively detained thousands of Palestinians for prolonged periods of time without prosecution, without informing them of the charges against them, and without allowing their solicitors to study the evidence making a mockery of the protections specified in Israeli and international law to protect the right of liberty and due process, the right of defendants to state their case and the presumption of innocence.

“There are 308 Palestinians are currently being held “administrative detentions”

“Apportioning political labels to detainees is no justification for prolonged imprisonment without trial”. ENDS

I'll keep praying for your husband and your loved ones. And for you, dear sister.

Please give your brave little ones a hug from me. I'll tell my sons about them and their courageous father.

How a great man Khader Adnan is.

Peace be upon you. Stay strong.

Dear @KhaderAdnan, There are no words to describe your bravery. In this life or the next. Justice will prevail. #KhaderAdnan

what you are doing is straightening our backs, and raising our heads. You teach us resistance. 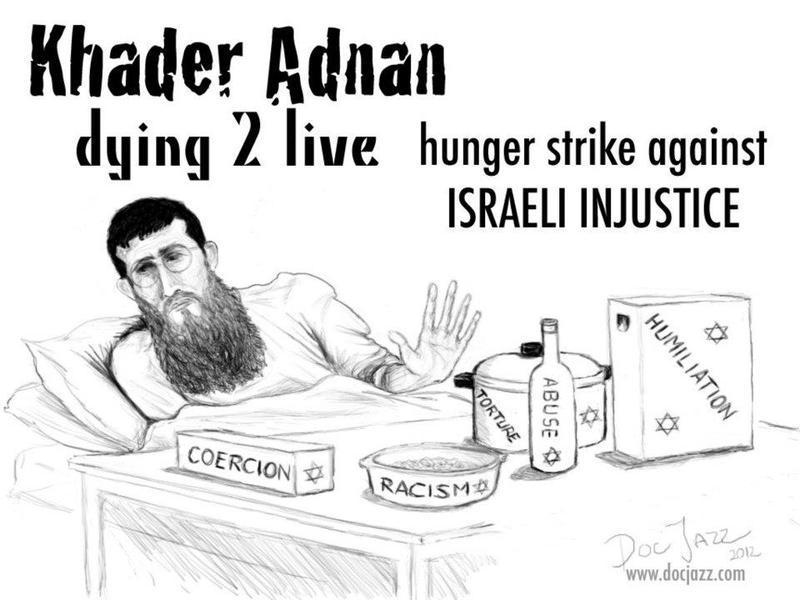 you breathe dignity into our rotten souls, god bless you, and your family #KhaderIsAlive